I have affiliate relationships where I am paid commission on sales through my links.  Full details here.

Looking for the inside scoop on what real people are saying about this popular online mattress? I’ve scoured the internet with a fine tooth comb to bring you DreamCloud Mattress customer reviews from several different sources. As helpful as it is to read through customer reviews on the company website, I always like to look further afield to places such as the Better Business Bureau to see if there are any problems lurking. I’ve got a full analysis and opinion of customer reviews of the DreamCloud mattress for you below.

Before we get started, please note that the DreamCloud mattress was totally overhauled in August of 2019, with major changes to pretty much every component of the mattress. I’ve taken this into consideration to only bring you customer reviews of the very latest DreamCloud, the “2.0” if you like, so you’re getting information that is 100% relevant to the DreamCloud mattress that you are interested in.

I’ll give you an overview of the DreamCloud mattress, a breakdown and analysis of all customer reviews from all sources, and answer the ultimate question: is it a good buy?

First, An Overview Of The DreamCloud Mattress

DreamCloud is marketed as a luxury hybrid mattress and has a firmness rating of 6.5 out of 10 on the mattress firmness scale. This is a “medium-firm” rating, designed to feel comfortable for a wide range of people.

It is 15 inches high, which is taller than many other mattresses in boxes at a similar price point (which are often around 10-12 inches).

The DreamCloud mattress is made up of 6 layers:

2. Memory foam quilting (this second layer is stitched into the cover)

3. Gel infused memory foam (this is the layer that works hardest at providing pressure relief, gel infusion helps with cooling)

5. Pocket coil support core with heavy gauge coils around the edge of the mattress

6. Porous foam layer (for extra breathability and to provide a base for the coils to sit upon)

this is a big, luxurious mattress (15 inches height), and is quite heavy (queen size weight 127lb)

To me, the features that make DreamCloud “luxurious” as per the marketing claims are the Cashmere cover (a breathable, premium material), the generous mattress height and the thoughtful use of multiple layers of foam. You’re getting a lot of mattress for your money here.

While a firmness rating of 6.5 will suit a lot of people, there are some people I think this particular mattress is absolutely perfect for and also some who I think should look for a different mattress:

DreamCloud Is Well Suited To:

DreamCloud Will NOT Suit:

Analysis Of DreamCloud Mattress Customer Reviews From The DreamCloud Website

DreamCloud are very transparent with displaying their customer reviews, and you can easily search for both the positives and the negatives. They are also searchable by date, so you can make sure you’re only reading recent reviews about the current mattress, not the old model that is no longer available.

At the time of writing, there are no negative reviews for the new DreamCloud mattress on their website. The most recent comments were for the old model which is no longer available, and were written by people who either found the mattress too soft or too firm (how a mattress feels is incredibly subjective, I’ve given my recommendations for who will like this mattress and who won’t above) so there were no major red flags to discuss here.

Again, there are no comments on the DreamCloud “2.0” mattress; all comments date to the previous mattress so those reviews are not relevant to what you’ll be buying.

This is where things get interesting: there are a lot of comments for the new mattress in this section.

Generally, people who have left comments are happy with their DreamCloud mattress, and they feel like it is good quality and worth their money. However, four star reviewers did have a couple of things to say:

There are more five star reviews for the new DreamCloud mattress than for any other category.

People who felt compelled to leave a great review had these things in common:

Analysis Of Reviews From Other Sources

DreamCloud have had 143 complaints against them in the 3 years they have been in business, mostly to do with delays in returns and refunds. DreamCloud have responded in detail to every single complaint and resolved them all, so don’t let this number put you off trying them out.

While it is concerning that people felt the need to take complaints to the Better Business Bureau, you can find reassurance in the detailed responses DreamCloud has given to each and every case, along with the extremely high dispute resolution rate.

At the time of writing this article, i could not find any complaints on the BBB website that relate to the current DreamCloud mattress model.

When I investigated DreamCloud to write this article, I could see a BBB rating of B+ and the 143 complaints I have described above. However, when I look up the DreamCloud listing now, all I can see is an A+ rating and zero complaints. I believe this may have been updated to reflect that there are no complaints as of yet regarding the new mattress. I have written the BBB a “please explain” message and will update this post once I get a reply. In the name of transparency, here’s the (now hard to find) link to the older complaints if you need to read them.

Similar to the Better Business Bureau this seems to be a place where people go to write about issues they have had with delays in organizing returns and refunds with DreamCloud. From what I read, it was not the same people writing on two different sites.

At the time of writing, there were 17 reviews on the Consumer Affairs website, three of which seem to relate to the new mattress.

TrustPilot DreamCloud mattress customer reviews are based on the UK branch of the business, which was set up late last year. There are hundreds more reviews of people happy with their DreamCloud purchase on TrustPilot than those that were dissatisfied, and in my opinion better reflects a true cross section of people’s experiences than just looking at consumer watchdog site such as BBB or Consumer Affairs, as people only go to those sites to give their negative experiences.

That said, the small minority who left a 1 star review on TrustPilot experienced issues with delivery and returns, so this unfortunately seems to be a common theme for DreamCloud.

Happily, there were hundreds of people reporting their love of DreamCloud, and talking about how comfortable the mattress is for them.

What Does It All Mean? My Analysis Of What The Reviews Say

Here’s the short version: if you are happy with your DreamCloud purchase (and the majority of customers are) then you won’t have any problems and enjoy a comfortable sleep on your nice new mattress. If you’re not happy, you might experience some frustrations with sorting the return.

People do not complain that the mattress seems poor quality, nor do there seem to be any other overriding negative themes about the actual mattress itself that I could identify from reading through people’s reviews. The only complaints were about when the mattress did not suit someone’s personal preference, and the after purchase customer care from DreamCloud let the company down

The Ultimate Question: Do I Think It’s A Good Buy?

Nah, not really. The online mattress world is SO competitive that DreamCloud really need to be doing better here, especially with their service. For my money, I think the Brooklyn Aurora is your better buy, or the Helix Moonlight Luxe Mattress.

Buy Brooklyn Aurora With 25% Off Instead 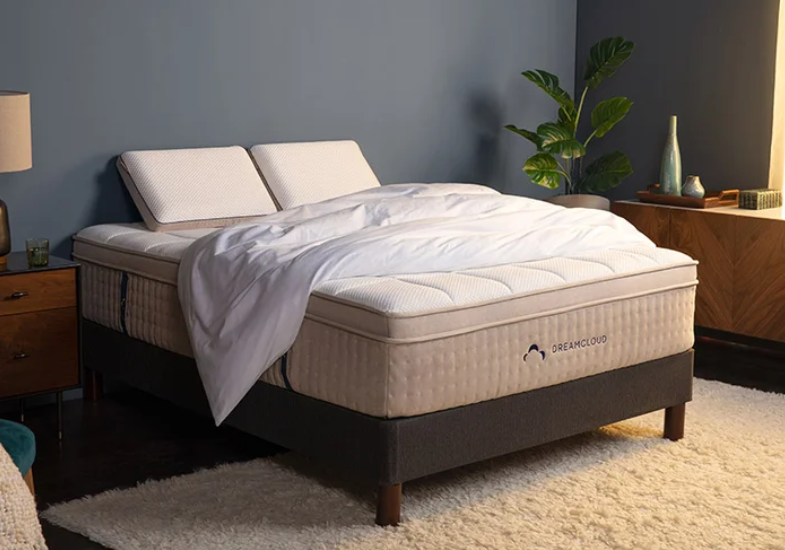 Emily is the creator and owner of bestmattressforyou.com. Emily's scientific background gives her an analytical, critical, and discerning eye to bring unbiased, thorough, and helpful content to the site. Your good sleep is her top priority.
All Posts »
PrevPreviousBest Waterproof Mattress Protector
NextBear Hybrid Mattress ReviewNext